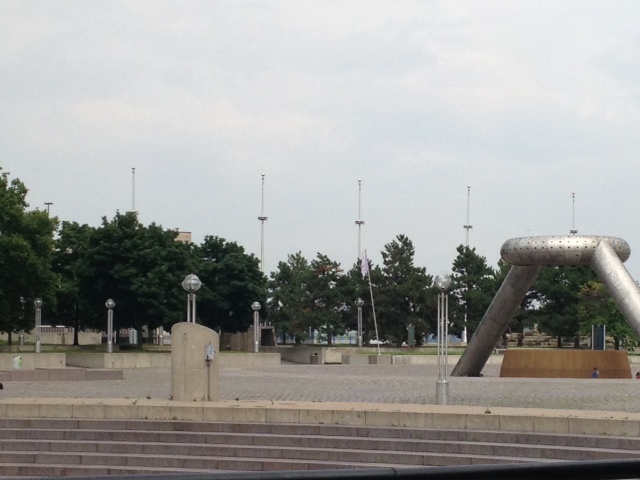 Revolution Flag Group, a Southeast Michigan based flag maintenance and flagpole installation company founded by mother and son team Constance and Michael Soviak, have entered into a public private partnership with the City of Detroit to repair the flagpoles and install American flags in Hart Plaza. Hart Plaza, in the heart of the revival of Detroit in Downtown, has been empty of patriotism for 13 years. The flagpoles, which are approximately 50 feet tall, have fallen into disrepair and have not flown American flags for 13 years. Michael Soviak said, “We at Revolution Flag Group feel that it is our civic duty to support the flag anywhere it is able to fly and we are happy to lead this effort.” Revolution Flag Group is also pledging to maintain the 20 flags and flagpoles for at least 2 years. We will ensure that this display will not fall into disrepair and that the flags will look brand new year round for years to come. Solar lighting will be installed to illuminate all 20 flags to create a striking look on Jefferson and the riverfront. The display of flags will run from Jefferson Avenue on both sides of Hart Plaza and to the riverfront. Michael Soviak said, “Once completed the flags at Hart Plaza will fly proudly and will bring the beauty that the American flag adds to the riverfront and Downtown Detroit.” The Hart Plaza project is slated to be completed by May 2014 in a flag raising ceremony around Memorial Day. The project will be dedicated to veterans.  An announcement for the project was held on November 15th at the Roostertail to kick off the fundraising effort. Speakers included State Senator Bert Johnson and Detroit Recreation Director Alicia Minter. “I hope the community at large will support this worthy project,” Senator Johnson said. “Revolution Flag Group’s President is a young man with civic-oriented plans and I’m proud to support his efforts for this goal.”

Donations can be made at any chase branch account titled to the nonprofit account:  Revolution Flag Foundation.

·         T-Shirts can be purchased to support the project at: www.teespring.com/patriotismtodetroit.